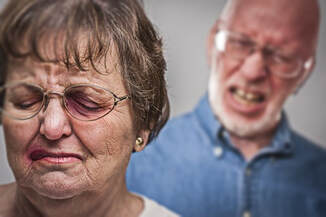 Abusers are not easy to spot.  They have the ability to be two different people.  To the outside world, they often appear to be kind, charming, loving and caring.  BUT when they are back in their homes, away from their public persona, they can be violent, aggressive and tormenting to their loved ones.

By the time you realize this person is no longer who you fell in love with, you are probably enduring full-blown abuse but find it difficult to leave the relationship because you’re bound to him in so many ways. Your attachment to him is most likely based on how he used to be and this can make you incapable of seeing him for who he really is: A wolf in sheep’s clothing.

There are many types of abuse, sadly almost too many to name.  We have seen individuals that have gone through severe neglect, child abuse, financial abuse, physical abuse, sexual abuse, satanic ritual abuse, etc. but psychological abuse or also called emotional abuse, rarely gets the kind of attention that others receive.

Heart to Heart Life Coaching recognizes that violence is rising at an alarming rate.  1 in every 4 women will be abused in their life time.  It is stated that domestic violence is the leading cause of death and injury in the United States.  There is no race, age, sexual orientation, gender, religious affiliation, educational background or socioeconomic level that domestic abuse and domestic violence does not affect.

Many times the perpetrator is a narcissist.  So what are the characteristics of a narcissist?
YOUR ABUSIVE PARTNER DOESN’T HAVE A PROBLEM WITH HIS ANGER; HE HAS A PROBLEM WITH YOUR ANGER!
One of the basic human rights he takes away from you is the right to be angry with him for the way he's treating you.
No matter how badly he treats you, he believes that your voice shouldn’t rise and your blood shouldn’t boil.
The privilege of anger is reserved for him alone.
When your anger does jump out of you—as it will happen to any abused woman—he is likely to try to jam it back down your throat as quickly as he can.
Then he uses your anger against you to prove what an irrational person you are.
This is what Sherée calls...."STARTING IN THE MIDDLE".
Abuse can make you feel straitjacketed.
You may develop physical or emotional reactions to swallowing your anger,
​such as depression, nightmares, emotional numbing, eating and sleeping problems, health problems, etc.
You’re too sensitive’ victims of abuse are told over and over by those whose reality depends on being insensitive.
Most women who have been in the victim role cringe when anyone tells them they are to sensitive.
In fact, sensitivity is a lovely trait and one to be cherished in any human being.